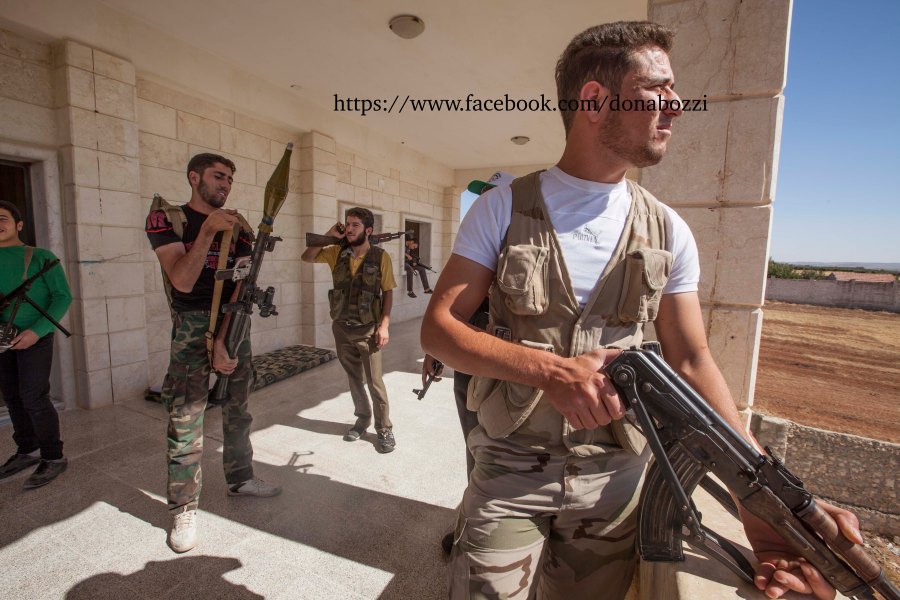 Syria’s Bashar Assad’s use of chemical weapons against the men, women and children of his country makes him a war criminal.

Summer 2013. In the Aleppo countryside,  the Al-Aqsa Brigade of the Free Syrian Army  fires down below at the Hezbollah militias  who have penetrated the villages of Nubbul and Zahara.

Of all the FSA commanders we met, Yaser Sokar, head of the Al-Aqsa brigade, an unprejudiced, soft-spoken man, is the only one who dared to shake our hands, wiping his own afterwards as a joke. The villages of Nubbul and Al-Zahra have been penetrated by Hezbollah; “Can the siege be broken by the SAA?”, we asked him. “No, never, we’ll eventually rout them out!”  He gave us the green light to go to Jabbal Shewehna, a front line at the bottom of a hill a few kilometers from Hraytan.  The Al Aqsa  fighters stand on one side of the hill, and the regime troops stand on the other. “If we take this hill top, we’ll take all of Aleppo!” says one Al-Aqsa fighter, still foolishly trapped in the magical thinking of victory  over “Gaahesh”, that’s what they call Bashar here from the donkey’s genes that shape his  face.  The rebels complained about the enemy’s superiority given its use of the Shilka, a tank with a sniper capable of shooting 2400 bullets per minute.

The FSA  fighters have received a few Concourse missiles, basically zapper guns,  but still lament the weapons of the poor.  They particularly badly need RPG-type of rocket that can better track and follow enemy targets, primarily the Russian  made T-72 tanks.

The FSA base, a huge barrack behind of a two-kilometer long wall used for sniping through the breaches in it, “is manned by about 400 men, or so the regime thinks!”, says a young fighter, laughing.
Standing out beside an antique mystery cannon and home made attempts at casting their own barrels,  is a “Dushka” machine gun, pilfered from the regime and fitted with a 14.5 mm cartridge that can release 300 bullets per minute.

Commander Yaser Socar’s dinner invitation had an hidden agenda; it was a  cry for help. The comfortably furnished rooms of his house exuded culture and open mindedness, and moderate wealth. Too unpretentious to present us with an exclusively Syrian meal, he added a European-type of course to the dinner to make us feel more comfortable. Then he exclaimed,  painfully:

“We are the real Muslims of Syria. Do we look like terrorists to you? They killed our children, they burned our houses. Did they call them terrorists? We are the ones they called terrorists! The true terrorists were released  by the regime in 2011 from Saidnaya prison, under pressure from the international community in the first few months of the uprising, as part of a smokescreen amnesty.

Our battalion, the Al Aqsa Brigade, didn’t get all the media attention that Al-Tawheed did, and therefore didn’t get the needed military supplies from Qatar that they did. We didn’t even get enough bullets from the military council of the FSA, let alone foreign powers!”

He said he would take us on the following day to Nubbul and Al-Zahra, two Shia villages on the outskirts of Aleppo, with a combined population of about 5000, where Hezbollah reigns and even the women carry guns. Here, the Al-Aqsa men enjoy a formidable vantage point: the terrace of yet another elegant private mansion turned into an FSA headquarters. We were actually facing Nubbul and Al-Zahra from about three kilometres away. The rebel’s elevated position above the villages definitely gave them the upper hand. Suddenly, the men ducked in a row behind the terrace wall to exchange fire. Suddenly, one of the Al-Aqsa fighters shouted “Allahu Akbar,” leaping excited  with his Kalashnikov lifted in the air. It then became still. He had just killed a man. When asked why Hezbollah woudn’t dare to retaliate the injury, they said that daylight doesn’t allow them to clash comfortably enough. All throughout the clash, our fixer and our friends held their back glued to the terrace floor. On it, lay a dozen or so empty bullet casings landed from the other side.

Zakaria Jrab, leader of the Katiba Shams Alhak (The Sun of Righteousness), is a member of the military commitee of the Council of the Governorate of Aleppo. I asked him:

“Mr. Jrab, what is the ideological difference between Ahrar Al-Sham and the FSA?  The way Ahrar members dress, in black from head to toe and wearing black kohl around their eyes, is not exactly reassuring”.

“There is no difference between the two: we are brothers, we coordinate with each other on the front line. However, Ahrar Al-Sham is more devout and more rigorous in the observance of the Sharia then the FSA, where some elements may be nonchalant or plain aloof. We can definitely say they are Islamists, but we work together because they are not radical.”

“Does the FSA has more affinity with Ahrar Al-Sham than with Al- Golani?” Ahrar Al-Sham is easier to deal with, more open minded and doesn’t have an agenda. Mr. Golani wants to take over the country after the revolution.”  “Why can’t you get good antiaircraft from the United States, like Turkey did?   “Because the United States has a precondition: they want to give Idlib and Aleppo to their ally, Turkey.”